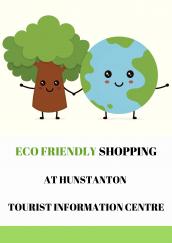 Temporarily closed due to the Coronavirus pandemic

New Councillor Co-opted on to Council

Hunstanton Town Council are pleased to announce that at Thursday 21st May 2020 first ever virtual meeting, members voted unanimously to Co-opt Andrew Jamieson to fill one of the 2 current vacancies.

Cllr Jamieson is not only now a HTC Councillor but is an NCC Cllr & Cabinet Member for Finance at Norfolk County Council. He describes himself as a local businessman with a strong desire to work with Hunstanton Town Council to secure the best for the town. More »

If you live in Hunstanton and are wondering how you can help your friends, neighbours and the local area, then why not consider joining Hunstanton Town Council as a local Councillor?

Hunstanton Town Council are looking to fill the last remaining vacancy with a dedicated, committed and passionate person who are willing to give their time and energy to get involved with the community, working with fellow councillors for a better future for Hunstanton.

As a local councillor, you will contribute to the development of policies and strategies and you may be involved in scrutinising council decisions on large and small issues, but most importantly, you will be representing the views of the people who live in Hunstanton.

So if you're a good communicator, have special skills you think will help the community or you simply want to be part of the team that shapes the future of Hunstanton, then please get in touch.

Contact our clerk Jan Roomes on 01485 532402 or email clerk@hunsantontowncouncil.gov.uk to find out more. » Less

Everyone in England, Scotland, Wales and Northern Ireland with coronavirus (COVID-19) symptoms can now get a test.

Hunstanton Town Council are taking the current Covid-19 situation very seriously and will be strictly adhering to Government guidelines in regards to the re-opening of business in their venues.

This document outlines a re-opening timetable with July 4th being the earliest date for the hospitality sector, including accommodations and attractions, to start opening their premises to customers. More »

The tourism sector reopening forms the third stage of a tentative timetable to ease the country out of lockdown, following earlier stages which include starting to return children to schools, the re-opening of retail and some relaxing of rules around exercise. The ambition of the third step is to open some of the remaining businesses and premises that were required to close, including food service providers, pubs, accommodation providers, public places and leisure facilities such as cinemas. However, this is dependent on whether the appropriate social distancing guidelines can be adhered to and the Government's five tests:

Hunstanton Town Council recognises that the COVID-19 pandemic will give rise to additional pressures on the voluntary sector to support the most vulnerable in our communities.

In order to enable smaller voluntary sector groups to mobilise capacity and capability to assist in the response, the Council are now providing cash grants to registered charities, as well as some local community and volunteer groups within Hunstanton. More »

What the grant can be used for

Examples include, but are not limited to:

Staying Safe Outside Your Home

We can all help control the virus if we all stay alert. This means you must:

Do not leave home if you or anyone in your household has symptoms. 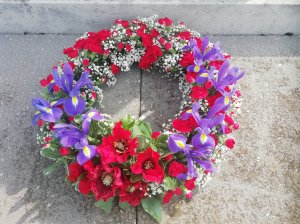 Deputy Mayor of Hunstanton Cllr Adrian Winnington stood silently for 2 minutes this morning at the War Memorial before laying a wreath in memory of those who lost their lives.

VE Day Messages From Your Councillors 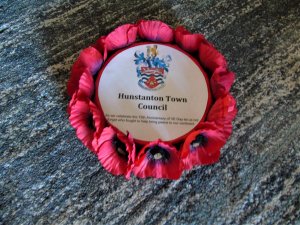 VE Day celebrations will be very different this year for everyone and it is important that we all do our bit to Stay Home, Protect the NHS and Save Lives.

However, we can all still remember the sacrifices made at home and abroad during World War II, and celebrate the arrival of peace in Europe 75 years ago. Mayor Cllr Anthony Bishopp

"As we celebrate the 75th Anniversary of VE Day let us not forget those, like my wife's father, who fought their way across North Africa and up through Italy to help bring peace to our continent. They lost many friends and colleagues along the way." Deputy Mayor Cllr Adrian Winnington More »

"May 8th commemorates the day that Europe won victory over Germany, later to be known as VE Day. Although we celebrate the end of WW2 in quarantine this year and away from family members, it is a time to remember those who gave their lives so that we might live ours in freedom" Cllr Maureen Howard, Chair of Community Engagement

It is such a pity we cannot mark this event as Hunstanton Town Council and the residents intended to do.

The bunting displays in various areas are heartwarming and demonstrate, yet again, the powerful community spirit which exists within our town.

To all the heroes of yesteryear - to those who lost their lives and those who willingly put their lives on the line for others, we salute you. Cllr Verity Jowett

As a Town Council we had grand plans to celebrate VE Day Those plans have had to give way to the necessities of the times The images that we have of VE Day are of people dancing in the street and of laughter and joy. Father's sons and brothers would be coming home but many more would never come home. They lay to this day in foreign fields where there loved ones could not attend funerals or mourn by grave sides. Those that danced, danced with relief that they had survived and that their families would no longer be decimated in a war that had lasted so long. The country had lost a generation and what was left was going to have to work hard to rebuild our world. My father came home from his service in the Navy. He never spoke of the war. Many never did. Those at home danced and he went to Singapore to clean up the horrors of the prison camps. He never spoke of that either. Some things are best forgotten by those that served. Let us never forget though the life that they fought for us to live.

Isn't it ironic? Soon, we hope we will be celebrating our world returning to normal. Like those of the past we will be coming back to a world where many people will be missing and people will have been unable to mourn their dead in the traditional way.. We wont have spent as many years as those that suffered the wars did and hopefully our country will not have to work so hard to recover. We will have missed our freedom for a short time in comparison. Yet again though the many will owe so much to so few. Let us never forget what they have done for us either. Cllr Wendy Croucher, Chair of General Purposes & Community Engagement Committee